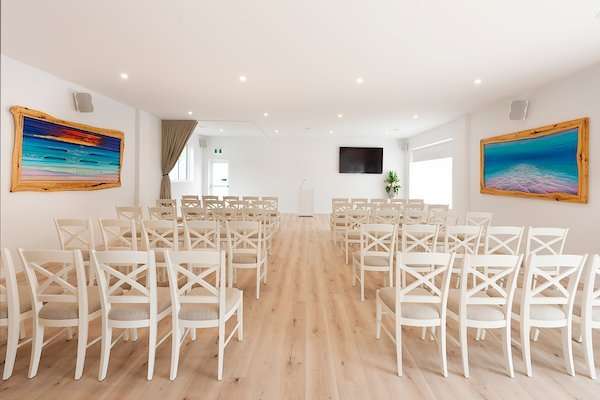 With the build providing income for over 20 local businesses during a lean summer, the new venue has been established in response to increasing interest in informal, non-denominational funeral gatherings that focus on celebrating the life of the person who has died.

“We’re noticing an increasing trend away from formal, traditional funerals. Many Geelong and Surf Coast residents now prefer a funeral that is more relaxed, and that truly honours the life and personality of the deceased person,” says Beth King, General Manager of Kings Funerals, a family business in operation for over 65 years.

With four venues servicing clients from Golden Plains to Geelong, Bellarine Peninsula, and Lorne, the Kings family is well-positioned to tap into the preferences of the region.

Kings’ Senior Operations Manager and Torquay local Briohny Fitzgerald, together with her husband, Irish big wave surfing legend Richie Fitzgerald, has witnessed many a ‘paddle-out past the break’ in honour of Surf Coast lives. 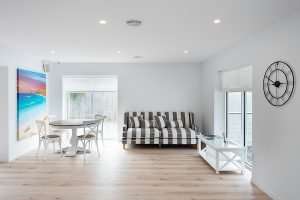 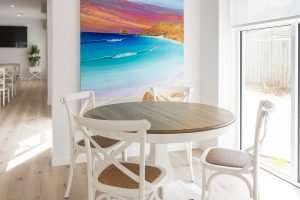 “We’ve realised that a space that matches the passion we all have for sun, sea and sand is hugely important. Traditional funeral homes can often feel sterile and unfamiliar, and even scary. In Torquay, and in all our venues, we work on creating a space where people feel comfortable and relaxed. This means people are far more likely to feel like connecting and sharing stories, which is of course key to the grieving process,” says Briohny.

In the new Torquay space, everything from colourful paintings of local beaches to the soaps, scents and catering, comes from familiar, often favourite Surf Coast purveyors. Chairs can also be arranged in circular or cabaret-style seating formations if traditional theatre seating doesn’t feel right. Anything is possible: a rug on the floor, barefoot standing affairs, whatever is most suited to your gathering. 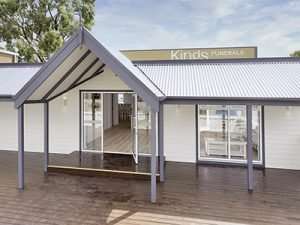 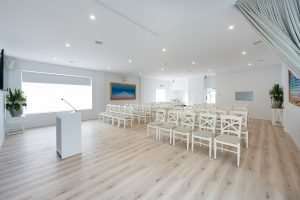 Kings Funerals are also passionate about doing away with the stigma and fear surrounding funerals and death in general.

“Many people go through life not thinking about death at all, and not wanting to engage with it. We avoid the euphemism of ‘passed’ or ‘passed away’, as it can be hard to grieve without acknowledging the reality of death. We aim to help create a funeral gathering that is an authentic tribute to the person who has died, allowing those who loved them to support each other as they start to accept this new reality,” says Beth King.

Over the last year, the Kings family has also experienced all the issues of dealing with bereavement during a pandemic.

Kings Funerals in Torquay is located at 45 Geelong Road, Torquay. Book by appointment on +61 3 5248 3444 or info@kingsfunerals.com.au to discuss your pre-paid or at-need arrangements.